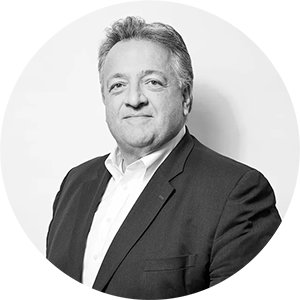 Dr. Noubar Afeyan, is the founder and CEO of Flagship Pioneering, an enterprise where entrepreneuriallyminded scientists invent pioneering solutions to improve human health, nutrition, and sustainability. Dr.
Afeyan is a lecturer at Harvard Business School; and from 2000 to 2016 was a senior lecturer at MIT’s Sloan
School of Management where he taught courses on technology-entrepreneurship, innovation, and leadership.
He teaches and speaks around the world on topics ranging from entrepreneurship, innovation, and economic
development to biological engineering, new medicines, and renewable energy.

Dr. Afeyan has co-founded and helped build over 50 life science and technology startups during his career as
an inventor, entrepreneur, and CEO. He was founder and CEO of PerSeptive Biosystems, a leader in bioinstrumentation that grew to $100 million in annual revenues. Aer PerSeptive’s acquisition by Perkin Elmer/
Applera Corporation in 1998, he became senior vice president and chief business officer of Applera, where he
initiated and oversaw the creation of Celera Genomics.